The report “IT Professionals in Central and Eastern Europe” prepared by No Fluff Jobs shows that almost every 2. IT specialist from Poland, given the choice of other countries in the region, would preferably work in their home country. What’s more, IT specialists from the Vistula region are also more willing to change their current place of work than other respondents to the survey – as much as 41% of the respondents. of them are either actively looking for new professional challenges or are looking for them but are just looking around. Poland also turns out to be a dream country to work for our neighbors from Ukraine – IT professionals coming from there indicated it in first place.

The most attractive countries for IT professionals in the region

Attractive place to work not only for domestic IT professionals, but also for others, participating in the survey No Fluff Jobs “IT professionals in Central and Eastern Europe”, proved to be the Czech Republic. The study shows that almost 96% of respondents said that their home country was the most difficult place to find a job abroad. Czechs, when given the choice of working in other countries in the region, would first choose their home country and this result is incomparable to any other country (Slovakia – 57%)., Poland – 45 percent., Hungary – 43 percent.). Moreover, the Czech Republic in second place, in addition to their homeland, which ranked first, was indicated by 34% of respondents. Slovaks, 19 percent. Poles and 11.7 percent of the surveyed IT specialists would prefer to live in Poland. Hungarians.

The situation is completely different in the case of our neighbors from across the eastern border. Only IT professionals from Ukraine as a dream country to work in the region, in first place indicated Poland (39.2 percent.). The homeland in their case was in second place (30.5 percent.) and slightly ahead of the Czech Republic (30.2 percent.).

– We are very pleased with the fact that among the surveyed regions, our native IT specialists would first of all like to bind their professional life with Poland – says Marek Psiuk, CTO No Fluff Jobs. – However, the survey conducted by us this year shows that IT professionals from Poland receive job offers from other European countries such as England (54.5 percent.), Germany (53.5 percent of.), the Netherlands (17.2 percent).), Sweden (15.3 percent.) and Norway (14.3%).). It is therefore necessary to convince them that it is worthwhile to work in their homeland, by giving them a job in Poland.in. great opportunities for personal development and soft skills, contact with the business, interesting projects, responsibility and autonomy. Because apart from finance, these are the main factors that make them stay with a company for longer.

Poles and Ukrainians most open to new professional challenges

Portal No Fluff Jobs decided to check whether the IT professionals from the surveyed region are actively seeking new professional challenges and what affects it. And it turned out that compared to colleagues in the industry from the region, it Poles and Ukrainians declare the greatest willingness to change jobs. The survey shows that 41% of the employees in Hungary. of Polish professionals and 40% of. Ukrainian IT specialists indicate that they are either actively looking for a job or they are looking, but only looking around. 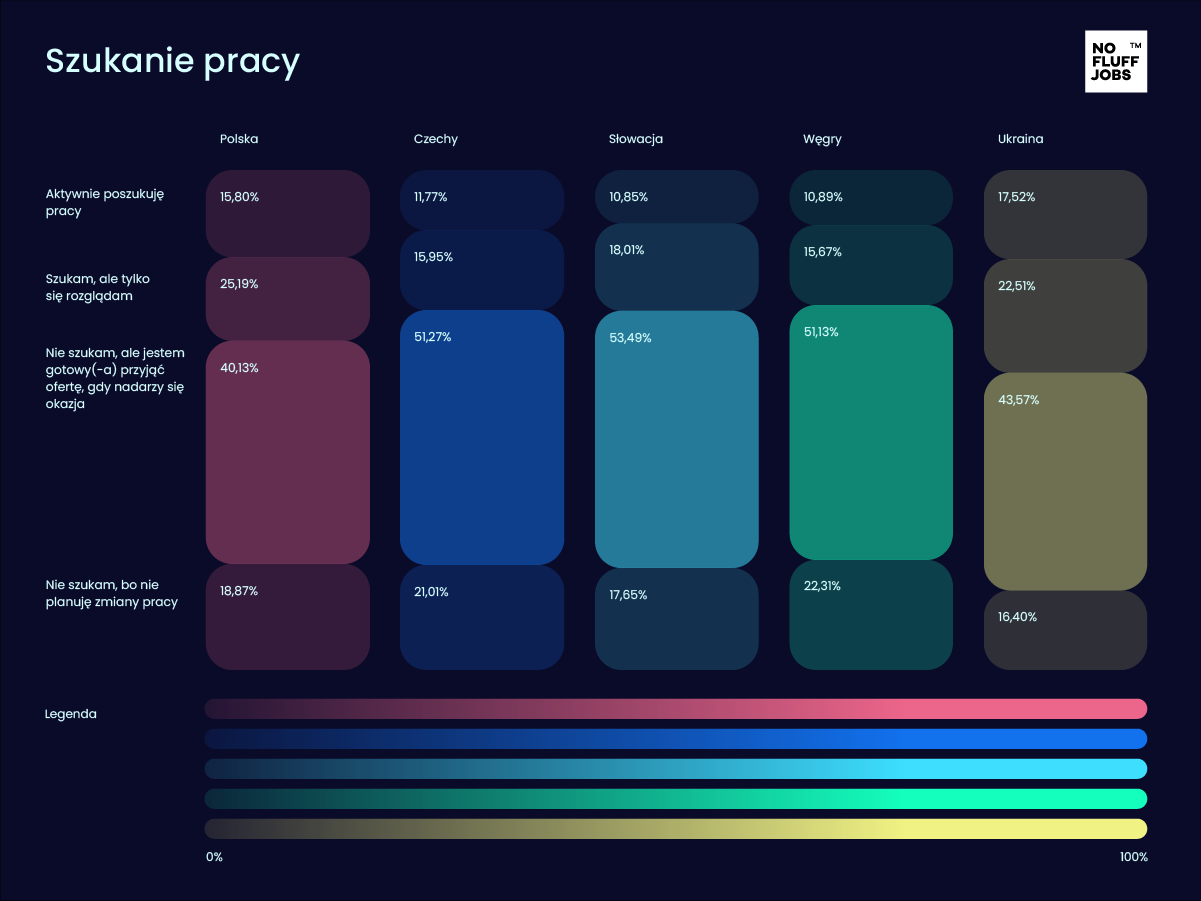 IT workers in Hungary were much less willing to change – as many as 73% of respondents. of them replied that they do not plan or rather do not plan to change their job. The majority of IT professionals in the Czech Republic and Slovakia (72% and 71% respectively) are similarly uninterested in new professional challenges.).

Reasons for looking for a job

According to IT professionals from the region, it is not only financial conditions that drive job changes. Although salary was indicated by representatives of each of the surveyed countries in the first place, just after it they mentioned the desire to seek new professional experience and the opportunity for personal development. 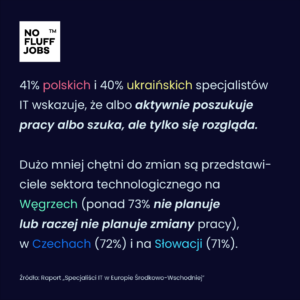 The following responses were slightly different. For Czechs and Slovaks, the reasons why they would change their jobs were unsatisfactory employment conditions (type of contract and working hours) and lack of work-life balance. Poles and Ukrainians, in turn, referred to the economic situation in the country (28 and 38.4% respectively).), while in the Czech Republic this proved to be a marginal problem (<10 percent.). One of the factors that motivate people to change jobs is also the political situation. It was most often mentioned by IT professionals from Hungary (30.3%).), followed by representatives of the IT industry from Ukraine (24.9%).The table presents net wages in general, irrespective of the type of contract) and Poland (25.4 percent of.). As many as 25.1% of. Hungarians are also motivated to change by bad atmosphere at work and this percentage is incomparably higher than in other countries.

Formalities are the biggest difficulty in finding a job abroad

No Fluff Jobs asked IT professionals from the region also about whether finding a job in another country is a difficult task and opinions on this issue were strongly divided – it poses minor and major difficulties. 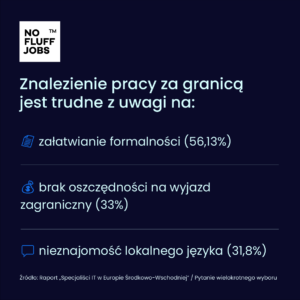 One example where this contrast can be seen is Slovakia. Nearly 20% of. of those working in the IT industry from this country indicated difficulties in trying to find a job outside their home country, with 35% indicating that it was difficult to find a job abroad. declared that it is not difficult for them. On the other hand, nearly 40 percent of the. IT professionals from Ukraine indicated that looking for a job abroad is difficult or rather difficult and this is the highest rate among the countries surveyed. At the same time 31% of. Ukrainians opted for the answer “easy” or “rather easy”.

And what is the biggest difficulty in looking for a job outside the home country for IT professionals from the region? Formalities proved to be a significant problem. However, looking specifically at individual countries, other interesting trends emerge from the survey. For example – for Slovaks and Hungarians a big obstacle is separation from family and friends (in each country – over 47%). indications). On the other hand, Hungarians and Ukrainians also point to the financial aspect – the need to collect savings for the trip is a big problem for more than 39% of IT professionals. in each of these countries. For Polish IT professionals, on the other hand, one of the biggest difficulties (nearly 43%) is the legal restrictions on working abroad. indications) are also various legal restrictions that regulate work abroad.

– Our survey, the first and only of its kind in the market, showed us many interesting trends in the industry in Central and Eastern Europe. Thanks to it we can see m.in., The survey was conducted in order to identify the obstacles faced by IT professionals in the region, whether they are currently looking for new professional challenges and what are the main reasons for changing their current jobs –summarizes Marek Psiuk, CTO No Fluff Jobs. – Those who would like to know more details about it, we strongly encourage you to read extended version of the report No Fluff Jobs. It will allow us to learn even more about the needs of employees in the IT industry in order to meet their expectations.

The survey was attended by 4185 IT professionals of the 5 CEE countries (Poland, Czech Republic, Slovakia, Hungary, Ukraine). In each country, care has been taken to ensure that the sample is appropriate and based on the proportion of IT professionals. Among the possible types of contracts in the survey there was a local equivalent of the contracts known in Poland. The amounts for individual countries are the equivalent of the indicated wage level in the local currency (exchange rate of 9.07.2021). The earnings table in the report presents net salaries in general, regardless of the type of contract.

Some questions in the report gave the opportunity to select more than one answer – the values do not add up.